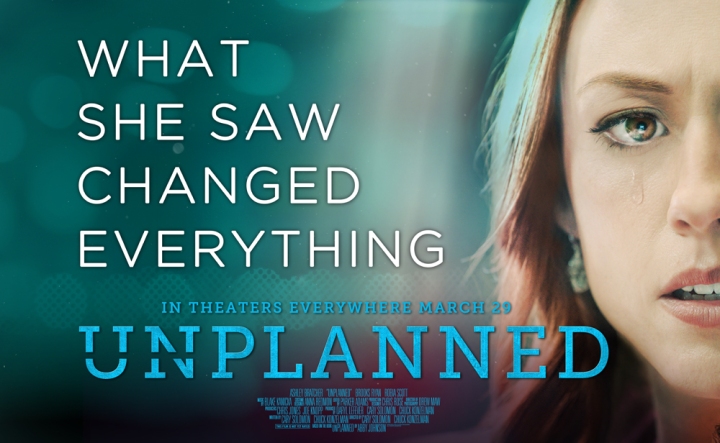 Unplanned, the movie that tells the true story of former Planned Parenthood worker Abby Johnson, has done incredibly well over the last few weeks. It has a wide variety of perspectives to share on the issue of abortion, as shared in this article from Verily Magazine. It has also stayed within the Top 10 spots in the box office, much to the chagrin of the mainstream media. Despite efforts to downplay the movie’s premiere, and to potentially scare people off with it’s ‘R’ rating, it seems that there is a healthy amount of people who are willing to hear about her difficult journey. And I wasn’t one of them….

Let me take a minute to set some things straight. I am pro-life. I believe that life begins at conception, and that all forms of abortion are categorically wrong, at any point during a woman’s pregnancy. I am totally against birth control/contraception in all of its forms.

So, why didn’t I want to see the movie?

I have a difficult time watching movies that I just know will make me sob. If the film is moving enough, it feels like a punch in the gut. And I knew, by the very nature of this movie, that I was about to be gut-punched. And I, a pro-lifer, didn’t want to deal with it. So what (Who) changed my mind?

God. My conscience. Plain and simple.

When you see a movie on its opening weekend, you vote with your dollar, to borrow a phrase from my aunt. You tell Hollywood and the film industry, “I want more movies like this one. Make it happen.” If enough people do it, they can’t ignore the dollar signs forever. I was not about to be a bystander, letting other people do it for me.

Secondly, your presence in the theater makes a difference. The cashier behind the ticket counter sees one more person who wants to see this movie. Your fellow movie-goers in the theater feel a sense of community, i.e.: “Hey, that’s great! I’m not the only one who showed up. Now I don’t feel like a weirdo.” As you walk out of the theater, perhaps in tears, others will witness you’re reaction. Maybe they will think about important issues for the first time in a while. You might make them curious, uncomfortable, or even angry. Just so long as they don’t remain complacent.

So, suppressing my own apathy and gulping back my fear at what I knew was coming, I let God win and went to see the movie on opening weekend.

I had initially thought the ‘R’ rating to be a foolish trick of liberals in Hollywood who wished to discourage attendance. However, although I still think that theory has merit, I also believe it was relatively wise choice. This is not a cutesy, B-rated Christian movie that quotes Bible verses to you every 15 minutes, so don’t take your very little ones to see it. It’s intense, and it’s a stark picture of reality. Teens could very well be uncomfortable with this, but I’d encourage them to watch it, especially since kids of their age group are a main target of the abortion industry.

The theater kept the lights on the whole time the movie was playing, and for this I was actually thankful. The subject matter can be heavy and challenging to handle, and watching it in the dark could feel a bit claustrophobic. If that’s the only way you can see it, however, then don’t let the lack of light scare you away. Pro-life issues need support, and if that means that we get a little uneasy on behalf of dying babies, then so be it. This was not a gore-fest, but it does make one pause and re-assess one’s priorities. And the filmmakers did break up the emotionally tough scenes with lighter moments, thus making it easier to handle.

The acting isn’t campy, which is something I always appreciate as a viewer. Ashley Bratcher, who plays Abby Johnson in the film, is believable in the role and brings a sense of authenticity to the screen. Abby’s story is by no means a clean or neat one, and the viewers are told that in no uncertain terms at the beginning of the movie. One couple got up and left after half an hour. We’re dealing with some tough stuff here.

When the movie ended, everything was quiet. No one clapped. It emptied me, hollowed me from the inside out. Stupid daily occurrences suddenly seemed infinitely less important. It’s like what people have been writing in the Internet articles: you walk out of that theater a changed person. You can’t un-see what you just saw. And now you have a greater responsibility to speak up, speak out, take action, write, pray, or do whatever you can to raise awareness.

So what does this mean for you?

Did Unplanned turn out to be less uncomfortable than I had anticipated? No, no it did not. It was more heart-wrenching than I could have imagined. It was everything I expected and more. I left that theater with a tear-stained face, pockets filled with Kleenex, and a deep ache in my chest. Watching the portrayal of a baby recoiling in utero from the abortion doctor’s tools, knowing it failed to escape (though not depicted on screen), listening to the sounds of the suction and mechanized tools used to extract it…..well, it changes you. Those sounds will ring in my ears and those images will stay in my brain, but it proves that no matter how fidgety we may feel about topics like abortion, we simply cannot stay silent. Elie Wiesel, the famous Holocaust survivor, once said:

It is complacency and the fear to speak that gives the perpetrators of such crimes the upper hand. Abortion is the Holocaust of our generation. And all the victims are silent. And both holocausts share two vital things: the loss of human potential, and the disrespect of human dignity, of the sacredness of life. If we can take a stand against the tide, each in his own small way, we can start making waves. That’s what really counts. Each of us doing our share to end an enormous tragedy.

I went into Unplanned unprepared, and I came out very much awake.

2 thoughts on “How Did I Feel About “Unplanned?” Unprepared…”

I'm Katie! I'm a twenty-something writer, and story-telling is in my blood. I'm an avid fan of C.S. Lewis, a devoted old movie buff, and a Catholic who's gonna keep on practicing till she gets it right!